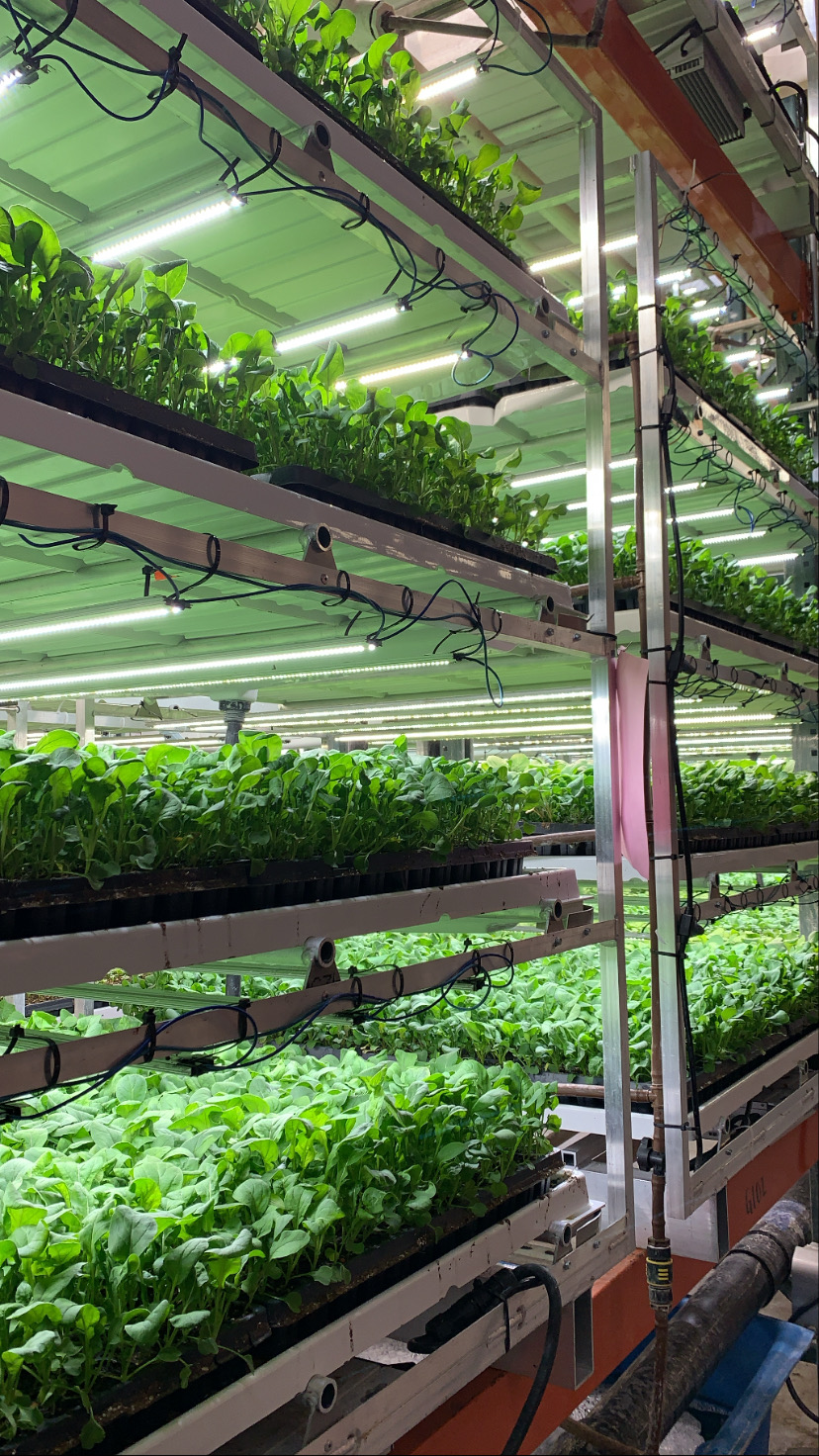 When most of us envision where our vegetables come from, we imagine acres of farmland being plowed, irrigated and harvested out in the country. While this is still the most common form of growing food, Forward Greens in Vancouver is taking agriculture up a notch—literally. Greens grown here are sowed, grown and harvested completely indoors and in rows rising vertically up to 26 feet in the air.

Co-founders Ken Kaneko and Will Tabajonda started out as good friends in high school in California before Kaneko landed a job at Intel in Hillsboro after college. After some time working in electronics, Kaneko wanted something new. “I wanted to bring some of my past experiences in manufacturing and operations to doing something to improve the supply chain for food.” Cutting down on transit time between farms and distributors and store shelves would improve the quality of the food, as well as the carbon footprint of the entire process. Kaneko and Tabajonda thought, “‘Why don’t we grow the produce pretty much in the same neighborhood, right next to the distribution centers of all the major retailers?’” The Pacific Northwest was the perfect location, in part because of the proximity to distributors and also because of the local clientele: an environmentally conscious public with an appetite for locally grown, organic greens.

The next step was developing an efficient, controlled way of growing food that could expand on earth-friendly practices. The solution that would set them apart from traditional farms was indoor, vertical farming—a method of growing plants in a temperature- and humidity-controlled environment that is free from the ecological constraints of outdoor farming, and in a facility that allows the food to grow up instead of out.

It all begins in the seeding area, where locally sourced soil is transferred through a hopper into basic nursery trays that are then sowed with seeds and placed into an indoor, specially lit, humidity-controlled greenhouse. Indoor growing is certainly not traditional, but it is much more efficient than outdoor farming. “Usually out in the outdoor field,” Kaneko told me, “it takes anywhere from four to six days [for these seeds] to germinate, and that’s because there are other environmental factors like temperature, humidity, birds might eat the seed, whatever. But here, because of the elevated temperature and humidity, the seeds crack open within one to two days. And we’re able to control that to have 90%-plus germination rate, whereas in another outdoor site you might have as low as 60%.”

After a day or two in the greenhouse, sprouts get moved over to large racks that are stacked as high as 26 feet, and that are equipped with a recirculating watering system that ensures no moisture goes to waste. “In an outdoor environment, you irrigate or spray water onto the fields,” Kaneko said. “A good portion of that [water] might escape into the environment through evaporation, another portion of it will get absorbed into the plants, and a very large portion gets seeped into the groundwater . . . Because we recirculate all the water from the twelfth layer down to the first layer, all the way up from zero feet to 26 feet up in the air, we’re able to recapture a lot of the water, and as a result, we’re saving tremendously on water use.” Each unit, or rack, provides water and electricity [for the specialized lighting] and the facility’s HVAC system controls for temperature and humidity. Using all of these tools to take advantage of the vertical space, together with the accelerated growing cycle, makes Forward Greens’ current 14,000 square feet of growth space (or, about 1.5 acres if the current plants were all laid out horizontally) equivalent to roughly 25-30 acres’ worth of productivity.

Once the plants are mature, they go through a harvester machine that removes non-food material such as soil and roots (all composted locally) then they’re moved into the food processing area, where they get packed and enter the cooler to await pickup and transport to grocery stores such as New Seasons and Chuck’s Produce. Because Forward Greens’ location in Vancouver is so close to their distributor and retailers that the product is on store shelves within about 48 hours of being harvested. “What that does,” said Kaneko, “is deliver a really, really fresh, tasty, healthy alternative to that outdoor, centralized farming method by growing in a very compact space and growing highly efficiently.”

This highly efficient and controlled farming has other important benefits too. “There’s nothing wrong with what [traditional farms] are doing,” Kaneko said. “They’re doing a fantastic job. But . . . we knew we had to be different in some ways. We never spray or have our product come into contact with pesticides, fungicides or herbicides, whether it’s the organic or conventional varieties.” Additionally, the indoor method saves on land use, reduces deforestation of land for agriculture, and, in Forward Greens’ case, puts existing buildings to use; the company is based in the previous HP campus off 34th Street in Fisher’s Landing.

On a more directly human level, Kaneko and his team are committed to providing jobs year round, not just during the outdoor growing season. “Obviously we’re trying to save on water, save on space, reduce our pesticide exposure,” said Kaneko, “but the whole big things that’s driving us is [our people]. They’re year round. We take a lot of care and energy in training them. We’ve been able to network with some great partners like Trillium, which is a Vancouver-based nonprofit [that assists with integrating people with intellectual disabilities into the workforce].”

With such an environmentally- and economically-friendly model, the future for Forward Greens is truly growing upwards. When I toured the facility, the team was preparing to expand within their current location to accommodate even more growing space for increased food production.

“What we’re hoping for,” said Kaneko, “is not necessarily to be known as a science project out in Vancouver but a true branded product that people get behind.” Learn more about Forward Greens’ mission and products at forwardgreens.com. 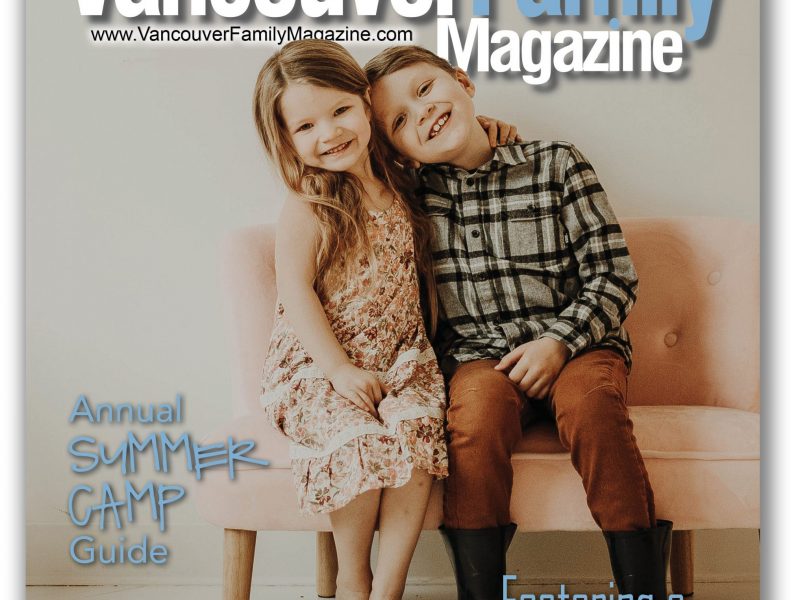